How Bidhive is creating a better procurement ecosystem

Procurement reform is happening all over the world, and the widespread adoption of open contract data is going to change the competitive landscape to create a more level playing field.

Openly published opportunities and contract information will see companies of all sizes build new skills in bidding, contract delivery and analysis to compete for a piece of the procurement pie. Is your organisation preparing for the change?

One in every three dollars spent by government is on a contract with a company. As the world’s largest marketplace, public contracting equates to $13 trillion of spending every year. Yet less than 3 percent of contract data is openly published across each stage of the contracting process.  We simply don’t know who has bought what from whom and for how much.[1]

From schools and hospitals, to power plants and dams, this means big budgets and complex plans. It also means ideal opportunities for corruption. Contracts can be awarded without fair competition, or companies can collude to rig their bids, taking turns to win so each gets a piece of the pie. This increases the cost of services to the public and to the other bidders.

That’s why public procurement is one of the best places to save public money, and a government’s commercial arrangements presents the most valuable datasets we can uncover because it’s where the money and power lies.

The OECD estimates that up to 20 percent of procurements budgets can be lost depending on the extent of corruption, waste, and inefficiencies[2], while Transparency International research cites that corruption alone can add as much as 50 per cent to a project’s costs.[3]

The fact is, we are relying on nineteenth-century institutions using twentieth-century tools to address twenty-first-century problems.  Without joined up data the cost of bidding is an expense to everyone involved.

There is strong evidence that overall transparency in bids and tenders decreases high-level corruption risks, shown from investigating more than four million public procurement contracts between 2006–2015 across Europe[4]. In fact, a World Bank survey of 34,000 companies in 88 countries validated that competition is higher, and there are fewer and smaller kickbacks in places where transparent procurement, independent complaint procedures and external auditing are in place.[5]

To tackle the problem the Open Government Partnership (OGP) was founded in 2011 by eight government leaders and nine civil society leaders from Brazil, India, Indonesia, Mexico, Norway and the Philippines. Their goal is to make government data – including public contracting data  – open, and accessible.  As President Obama put it, the overarching goal was to ensure that government genuinely serve their citizens, rather than serving themselves. By 2018 the partnership grew to 70 national and 20 local governments as well as thousands of civil society organisations.

Supporting bidders to move from paper to data

New developments are now coming into play with a ripple effect across the world, enabled by technology. At Bidhive, we’ve been working to align our platform data to the Open Contracting Data Standard (OCDS) since early 2018. The OCDS was developed by the World Wide Web Foundation through a a project supported by the Omidyar Network and the World Bank. It was created to support organisations to increase contracting transparency, and allow deeper analysis of contracting data by a wide range of users. In early 2021 Bidhive we will be publishing open global contract bidding opportunities for free so that procurement can become accessible to all.

Using open data is firstly, an initiative to rebuild trust in government. But it is also a way to promote accountability with disclosure and participation across the full procurement lifecycle, from planning to tendering and award (bid lifecycle), and to implementation and closure (source to pay).

One area we are particularly interested in exploring is the use of artificial intelligence to monitor and detect red flag risk indicators including the time between invitation and award, unfounded selection of winners, groundless disqualification, the absence of a bidding procedure and evaluation process, or selective participation.

In the past bidders have had to request a debrief where their bid was unsuccessful. We want to turn this into 360 degree feedback and open up the platform to gather bidder feedback on their experience with the procurement process too.

In the Ukraine, which has historically struggled with entrenched corruption, the government launched an e-procurement platform (ProZorro) making it possible for government bodies to conduct procurement deals electronically and transparently, and for citizens to have open access to the contracts. To amplify the voice of citizens, they launched DoZorro using Open Contracting Data Standard. DoZorro includes a business intelligence tool for assessing tender data, a public monitoring platform and an open complaints mechanism for bidders.

During the testing period, competition for Ukraine government contracts increased by 550 percent in a five month period, with bidding interest from foreign entrepreneurs increasing by 33 percent, and contract costs consistently coming under budget estimates. When citizens became involved more than 5,000 cases of suspicious activity were reported resulting in 22 criminal charges, 79 sanctions issued, and 1,200 tenders being changed as a result of feedback. [6]

As of January 2018, the Ukraine government has saved more than US$1 billion and thousands of new businesses are competing for contracts. Some 80 percent of government contracts now go to SMEs and perceptions of corruption in procurement have halved.

Open contracting is about following the money and joining all the information together across the entire chain of public contracts, from their planning to their tendering and award and onto their delivery and implementation. Evidence shows that disclosing this contracting information is not a deterrent for competition, but actually leads to an increase in the average number of bidders per tender.[6]

Bidhive is excited to explore new technologies that offer opportunities for proactive information sharing, bid participation, and collaboration, and as we begin to bring open data into Bidhive we will ensure we maintain the confidentiality and security of our customers’ data. Where the data is not in the public domain, Bidhive will not openly publish, share or distribute data to third parties. This includes the legitimately commercially sensitive collective workings of the commercial, solutions and bid team behind the development of a bid; trade secrets; profit margins; financial models including formulas and inputs; and information on subcontractor pricing along the supply chain.

We will follow the progress of the Open Contract Partnership, continually adapt our platform to open data standards, and will provide our user community with updates on any recommendations made at a system level for the disclosure, exception and redaction of contracting documents and information across the procurement lifecycle.

Change and reform is coming, and supporting unrestricted, easy access to procurement opportunities is just the beginning. In using Bidhive to plan, manage and track their contract bidding activity, our users will be able to join the open standards data to their own data, with tools to help them see market patterns and customer behaviour; and to monitor, analyse and anticipate competitor performance.  Importantly, our users will be able to build data flows with closed loop analytics to uncover new insights across the entire bid lifecycle.

Perhaps the best endorsement of open contracting are the 30 countries, 50+ cities, regions and governments opening up their contracting to get better results for their citizens. Has your government joined the reform?

[4] Agnes Czibik, et al. Lights on the shadows of public procurement: Transparency as an antidote to corruption, August 2019. 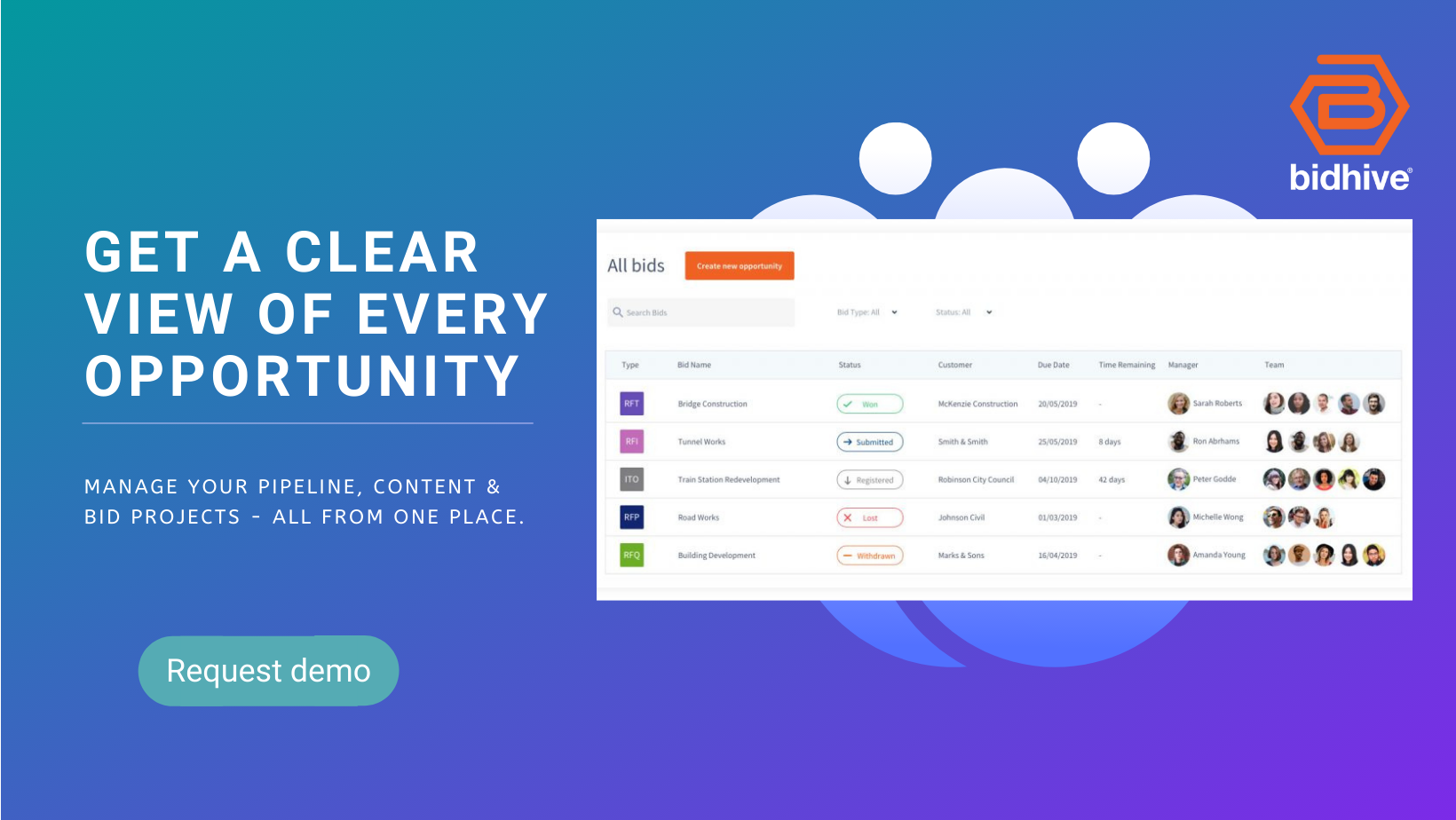 Bidhive, an award winning bid management platform for supplier tendering, today announced that it has been named as a supplier on Crown Commercial Service's (CCS) G-Cloud 13 agreement which went live on 9th November 2022. This contract follows Bidhive's prior...
Read More

If there’s one thing standing in the way of bid teams as they return to the office or do a 40 hour week from a spare room it’s the struggle to regain work/life balance as many transition from pyjamas to business casual. Fear not bidding friends. We listened and we...
Read More

Bidhive has joined the G-Cloud 12 framework in the UK to support commercial functions and arm’s length bodies bid to win and retain business.

Through the agreement, companies can accelerate bid process digital transformation to modernise their bid management capability  Bidhive and Harmonic have announced a strategic partnership to accelerate customers’ transition to automation with a joint commitment to...
Read More
Share This